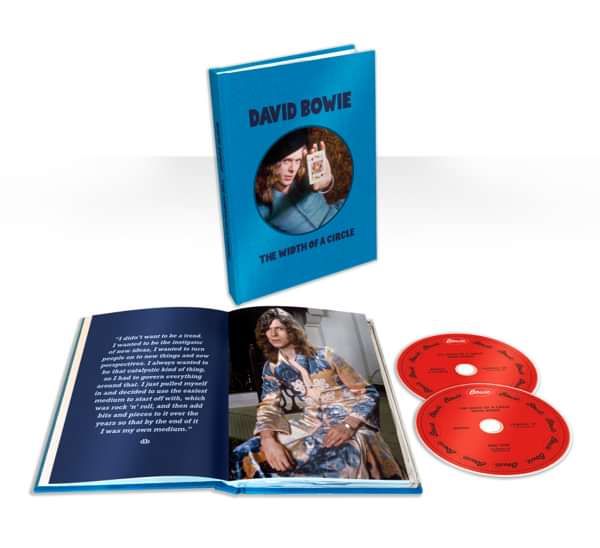 The Width Of A Circle (2CD)

The Man Who Sold The World David Bowie’s landmark entry into the 1970s not only began the collaboration with guitarist Mick Ronson that would continue with such Bowie classics as Hunky Dory, Ziggy Stardust and Aladdin Sane, it kicked off a 10-year run of indispensable albums stretching through 1980’s Scary Monsters.

The 2020 re-release of The Man Who Sold The World restored the album’s intended title Metrobolist, while featuring a new mix by original producer Tony Visconti. Taking its name from the album’s opening track, which was named after a painting by Bowie’s friend George Underwood, the new two-CD set The Width Of A Circle acts as a complementary piece to that album. Its 21 tracks feature non-album singles, a BBC In Concert l session, music for a TV play and further Visconti remixes wrapping up David’s recordings from 1970 and revealing the first sonic steps toward Hunky Dory.

The set contains two live performances from early 1970 The Sunday Show Introduced by John Peel and Sounds Of The 70’s both performed by David Bowie and The Hype, it also feature five songs by Bowie from The Looking Glass Murders aka Pierrot In Turquoise plus 2020 Mixes of five tracks including The Prettiest Star.

The Width of a Circle contains 2 CDs plus a 48 page booklet all housed in a hard back book style package with have a textured outer wrap with a soft touch lamination.

CD 2: THE LOOKING GLASS MURDERS AKA PIERROT IN TURQUOISE: